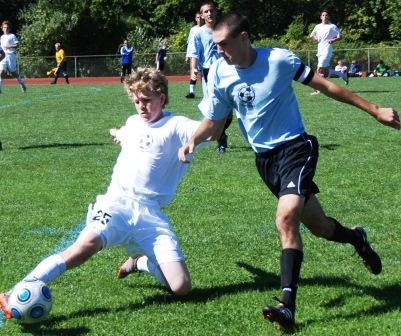 Wethersfield’s annual jamboree — honoring WHS and Staples victims of 9/11 — was held today, the actual anniversary of the 2001 terrorist attacks.  The weather mirrored that awful day 9 years ago:  a perfect, cloudless blue sky.

The Wreckers opened with a 0-0 draw against Fermi-Enfield.  The Falcons controlled play against the non-cohesive Westporters.

Harry Birch was a solid defensive force for Staples in Wethersfield. (Photo by Lisa Krosse)

But Staples picked up the pace in the 2nd match, against Wethersfield.  A ferocious series of 4 consecutive shots almost connected, and for the 1st time this pre-season the Wreckers strung together smart, sharp passes.  For the 2nd straight match, though, Staples drew 0-0.

“We saw what we needed to see,” said head coach Dan Woog.  “We’re nowhere near where we want to be, but as it does every year, this jamboree helped us find answers to some of our question marks.  It’s always a very important part of our preparation.”

The 2010 season begins Tuesday, with a 4 p.m. match at Fairfield Warde.