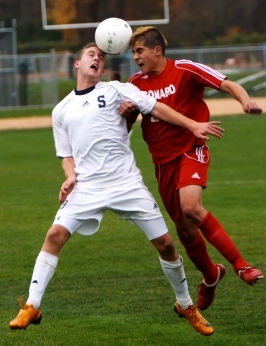 Though some of the Wreckers had never met their teammates, all played the same Staples soccer style. Their average age was older than their Hilltopper counterparts, but it was a close, competitive — and very fun — event.

Derek Kennedy ’05 scored twice for the Westporters. At the other end of the field, Dave Sharpe ’07 — the team organizer — made a spectacular kick save in goal.

The oldest player (Nate Bird ’91) graduated 3 years before the youngest (Max Hoberman ’12 and Will Meinke ’12) were even born.