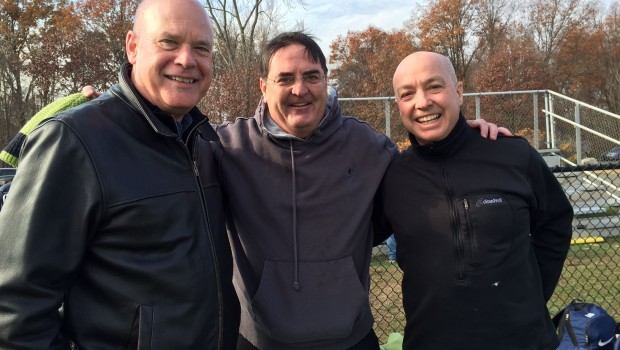 Over 70 former and current Staples players — as well as sons, academy players, future stars and others — worked up a Thanksgiving appetite at this morning’s event Turkey Bowl game. That’s record participation for the annual event. The amount of fun, camaraderie and good times was sky-high too.

Three games were played simultaneously at Wakeman Field, with opponents rotating several times. The quality of play was excellent. The goal of the day was a combination between Chris Mitchell ’91 and Kyle Martino ’99. After 5 consecutive headers between them, Mitchell finished with a spectacular volley. That team included 3 All-Americans: Mitchell, Martino and Mark Noonan ’83.

There was no overall winner, because everyone there — including parents and friends of the program — won.

The event also raised money for the Loeffler Scholarship Fund.

One view of the large crowd of players…

…and another. (Photo/Ed Diamond)