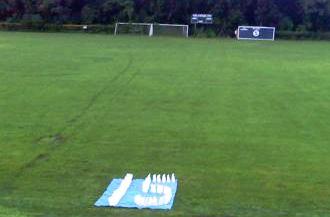 At the start of Friday night's candlelight ceremony at Loeffler Field, Preston Hirten's #15 was lit. As the sun set, his number burned brightly and proudly. (Photo by Val Wolgast)

Near the end of the 2006 Staples boys soccer banquet, Preston Hirten asked if he could say a few words.  The senior midfielder spoke eloquently about what that fall’s heartbreaking, joyful season had meant to him.

On Saturday, at their son’s memorial service, Marc and Lisa Hirten stood before an overflow crowd at the Unitarian Church and read that speech.  It touched the hundreds of mourners, just as it had moved 200 Staples soccer players and parents less than 3 years earlier.

At the beginning of the year I would never have seen any of this happening to us.  I wasn’t surprised that we did as well as we did, it was more about the fashion we did it in.

I also never thought that I would exit this last year in a Staples High School jersey as such a changed person, but sometimes the best changes and best experiences are unforeseen.

So many people use soccer and sports as a metaphor for life, but no team has made it truer than this one.  It wasn’t just games that were won, life long relationships were forged, memories were made, and life lessons have been learned.

Most importantly this team has inspired everyone involved with it.  I have been inspired by my teammates to become a better teammate, friend, brother, son, and most importantly a better person.  I was also inspired by their passion.  They not only had so much passion for the game of soccer, they also had a passion for each other, truly like brothers.

These bonds, filled with care, were ones that were built on time, dependent on trust, tested under the fire of competition and strengthened with the common love of the game.  The only way that I can explain this bond to you is that when we huddle up I can look every one of my teammates in the eye and I know that they will do everything they can for me, and I hope that they know that I would do anything for them.

I never knew the true power of our friendships until tragedy struck midway through the year.  It would be easy for a team to crumble under such adversity, but we rose up hand in hand, and although it wasn’t the true start to our season, that’s when we had meaning to our season.  From then on we walked together, sat together, ate together, and hung out together.

When our season finally ended, we left the field just as when we started our mission, hand in hand.  It was at this point when I appreciated all the experiences from this season because these were life lessons I couldn’t have learned anywhere else.  I believe that the life lessons I have learned from playing with these incredibly special people have made me into a better person.

Most importantly my journey in the last two years have taught me that no matter what life hands to you, and more importantly how it is handed to you, the only thing you can do is keep on moving.  So that’s what we are doing here.  We are moving forward, some are going to college, some aren’t, some know what they are going to do, some don’t, but no matter where you are moving on to I beg you never to forget this Staples team and the passion that we not only played soccer with, but the passion we lived life with.

Some teams are meant for greatness but this team was meant to live on forever in our minds and our hearts, and to take a line from Friday Night Lights, “Boys, my heart is full, what about yours?”

Throughout his life, Preston drew everyone together.   His soccer teammates and coaches admired and respected him.  His non-soccer classmates did the same – they knew he worked as hard in school as he did on the field.  His family, of course, adored him.

And – this is not so common – opposing soccer players and coaches appreciated Preston too.

The dozens of emails I’ve received, and the comments I’ve read on our website, are all heartfelt and meaningful.  All give important insights into this wonderful young man, and I know reading them gives comfort to Preston’s friends and family members.  But the ones that intrigue me the most are those from guys who played against him, and coaches on the other bench from ours.

Using different words, they all say the same thing: “I loved watching Preston play.  I wish he was on our team.   You must be so glad he was on yours.”

We sometimes forget that without opponents, we wouldn’t have a game, a league, or a season.  As hard as he played on the field against those other teams, Preston recognized that the other guys were good, tough, and competitive too – and they loved soccer (almost) as much as he did.  He bridged that gap beautifully.  He’d run you over – but then he’d pick you up.

He knew that the ultimate game was life, and he played it so well.  At our end-of-season banquet at Staples, he asked if he could say a few words.  Everyone before him had recalled memories of a mystical, heartbreaking and beautiful season.

Preston summed the season up perfectly when he spoke about having “24 brothers.”

All of us here today are brothers – and, okay, sisters.  No matter what jersey we wear – even if we have never worn one – we are all on the same team.  Preston has brought us together in death, just as he did in life.   He made many people stronger on the soccer field, and he made all of us better human beings off it.

Thanks, Preston.  I can’t think of a better gift anyone can give.

University of Mary Washington coach Roy Gordon drew appreciative laughter when — referring to Staples’ new tradition of having whoever wears Preston’s former #15 (currently the very hard-nosed and passionate Frankie Bergonzi) pass along that number to the next worthy player — he said:  “You can bet every year I’ll call Dan.  I’ll ask who wore #15, and I’ll recruit him.”