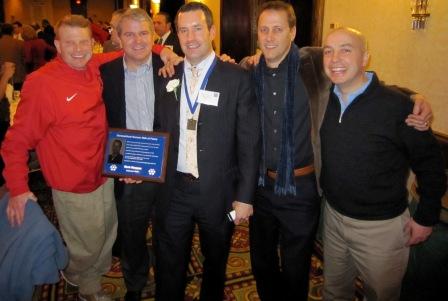 Mark Noonan ’83 — a 2-time Staples state champ, and high school All-American; star on NCAA Division I national champion Duke’s 1986 team; former MLS assistant commissioner, and now one of the leading sports marketers in the country — was inducted last night into the Connecticut Soccer Hall of Fame.

In front of a large crowd, including family members, friends and former teammates, Noonan paid tribute to the enormous legacy of Connecticut soccer — including his home town of Westport.  His words should be read by every local soccer player and fan.  Here’s what he said:

When you think about how far we have come as a soccer nation, and we have come a long, long way, you have to look no further than the names who have been enshrined in this hall — Connecticut’s hall — to see why.

I am humbled, honored and incredibly excited to join these great men and women whose contributions made it possible for me to be here today.

I have 1 goal tonight.  That is to thank, and tell you a little about the people who helped me get to this place.  Hopefully by the end of my remarks you will see that I am a reflection of all these great people who helped mold me.

Everyone in the room knows soccer is a team game.  While I may get the microphone tonight I feel like I am speaking not just for myself but for this team of people that helped get me to this place.  Please indulge me for a few brief moments so I can thank them.

My team begins with my family, who have provided the foundation for any achievement I’ve had in my life.

With me tonight I have Mom, who somehow raised 5 kids and kept her sanity, and Sister Mary Alma.

My dad, Peter, couldn’t be here tonight because he is in Barcelona feeding his soul at the Camp Nou.

My brother Mike Noonan.  As older brothers tend to do, he paved the way for me and made my path so much easier than it otherwise would have been.  As he moves on from Brown to Clemson, all I can say is “watch out, ACC.  That boy with scholarships is going to be dangerous.”

And my younger sister Diane who had the courage to play and captain the boys team at her high school, Green’s Farms Academy, because girls programs didn’t exist at the time.  Yes, we have come a long way.

If there was a Hall of Fame for wives and mothers, my wife Katie would be on the first ballot.  For the last 25 years she has not only tolerated me but also my lifelong mistress — otherwise known as the beautiful game.  And our daughters Olivia and Tess, who light up our lives beyond words.

My family also includes my Staples and Westport teammates, whose talents, support and most importantly lifelong friendship on and off the field are priceless.  I am honored to have with me here tonight  Rob Stone, Todd Coleman, Mike Brown and Brian Sullivan.

My soccer inspirations — most from Connecticut — are many.  They fall into a few different buckets, starting with my hometown Westport inspirations.

Mr. Loeffler was the patriarch of soccer in our area, and one of the most quietly effective people I have ever met in my life.  What a presence this man had.  He left us one day short of his 94 birthday last September, but his legacy lives on in so many of us.

Jim Kuhlmann.  No matter what I say I can’t do Kuhls justice.  What a coach, player, authority figure and mentor.  He was way ahead of his time, and molded me as a player and a person well beyond what I realized when I was younger.

My playing heroes.  Timmy and Paul Hunter, both members of this Hall.  And the Murphy brothers: Eddie, Dennis, Kevin, and Kenny Murphy.  And Shane Kennedy, a great goalkeeper and one cool cat.  I grew up watching, emulating and hoping some day to be half as good as these guys.  Special thanks to Tim Hunter and Dennis Murphy for being the best coaches I ever had at any level.

Dan Woog.  Dan cut me from the first travel soccer team I ever tried out for.  And I think after 30+ years, tonight is the night I will finally forgive him.  In all seriousness, no one does more for soccer in our neck of the woods than Danny.  In addition to leading his excellent Staples team to the LL state title this year he is our historian, conscience, promoter, connector and, most importantly, educator.  I learn so much from being involved in Dan’s program.

My last Westport inspiration is Dave Reynolds.  Many of you may not know Dave.  He was the proprietor of Ye Olde Bridge Grille, and for many years funded out of his own pocket one of the finest U-23 teams in the state.  The bar itself was a shrine to the team and a place that made soccer players feel like first-class citizens.  If you ask guy like the Hunters, Murphys, Mickey Kydes, Pedro DeBrito, Elvis Comrie, Ray Reid…they know what I am talking about.

My Connecticut inspirations start with Bob Dikranian and Joe Morrone.  Both Southern Connecticut and UConn were programs ahead of their time and made college soccer important to a small state.  To think we had such quality in such a small state was remarkable.  Their ability to recruit, train and play the highest level of competition inspired us all.

Warren Swanson.  Some of the most fun I had was playing on the Connecticut state team, coached by Warren.  What a nice, fair man who never got caught up with the b.s. that is so sad and rampant in youth soccer today.  He let us play and develop into young men.  There is a lesson for coaches everywhere in how Warren handled this team.

Chico Chacurian always, always made playing fun.  He taught me the rubber band trick. I can’t tell you how many times I have passed it on to kids, always referencing that he showed me how to do it and that no one would ever do it better than he.

My professional inspirations start with John Skipper at ESPN, who has made soccer matter at the Worldwide Leader in Sports.

Sunil Gulati.  Many people know him as 1 of the most powerful men in our sport.  Having worked with Sunil for many years, his skills as an administrator, diplomat, thinker and leader are extraordinary.  But what I’ve always admired about Sunil is his passion.  I am old enough to remember him driving the van for our CJSA state team, and working his way to the top by starting in the grass roots.  He’s earned his position, and let’s all hope he can bring us another World Cup!

Hank Steinberecher hired me at USSF and is one of the warmest and passionate men in the game.  Man, can that guy give a speech.

Don Garber, my boss at MLS.  Let me tell you, we are lucky to have him steering the ship.

Ivan Gazidis.  One of the smartest, most logical, down-to-earth people I have ever known in the game, not to mention a great strike partner on our Over-30 Westport teams before he moved to London.

In closing, I would like to thank and congratulate my fellow inductees for allowing me to share their spotlight tonight and, importantly, thank Pat Hennig and Bill Duffy, not to mention the the geniuses on the selection committee!

I’ve seen how far soccer in the U.S. has come in our lifetime.  The fun part is we’ve still only begun to scratch the surface of our immense potential. I can’t wait to see what’s next.  There is an activist slogan:   “Think Globally, Act Locally.”  I am so proud to see that the people in this hall have taken that slogan to heart and indelibly put Connecticut’s stamp on so many levels of the world’s game.   To this I say, well done.  Let’s keep it rolling.

Thanks again for this great honor.  Good night.