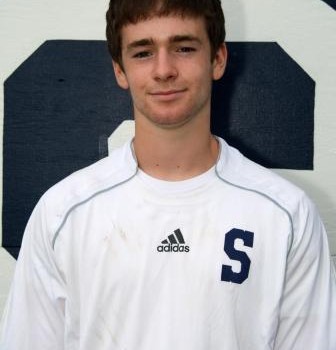 Staples captain, sweeper and 3-year varsity player Jack Hennessy was picked by the Norwalk Hour for their weekly “On the Record” interview.  He provided some great insights into Staples soccer, growing up, and Mohawk haircuts.

Staples senior Jack Hennessy has had the type of high school career most people can only dream about.  And it’s not over yet.

So far, Hennessy has won 2 FCIAC titles in baseball, was named MVP of the FCIAC playoffs last spring and the Hour‘s All-Area MVP, and recently helped the Wreckers win their 2nd straight FCIAC title in soccer.  Most high school athletes would kill for 1 FCIAC title.  Hennessy has 4, but has remained as humble as it gets.  Hennessy recently took time out of his busy schedule to go “On the Record” with the Hour.

Future goals:  I want to win a few state championships, go to college and be a writer of some sort.

Hour: What’s the best thing about Staples High School?
Jack Hennessy:  The coaches.  All 3 of my coaches really helped me become the athlete I am today.  Dan Woog, who allowed me to play sweeper for 1 of the best traditions in soccer, Laddie Lawrence in track for letting me run springs and Jack McFarland, who trusted me to play 3rd base as a freshman.  They all helped me with everything.

Hour: If you could change 1 thing about Staples, what would it be?
JH:  More free periods.  We’re only allowed to have 2 free periods as athletes.

Hour: Why is Staples soccer so successful?
JH:  It’s the tradition and the alumni.  As a kid in Westport, everyone wants to play for Staples soccer and contribute to the 51 years of winning seasons.

Hour: What’s your greatest athletic achievement?
JH:  Either going undefeated in soccer as a freshman or winning the FCIAC title in baseball as a sophomore when we were the 7th seed.

Hour: If you could trade your 4 FCIAC titles for anything in the world, what would it be?
JH:  A state title in soccer and a state title in baseball.

Hour: Who came up with the idea for everyone on the soccer team to get Mohawk haircuts?
JH:  Mikey Fitzgerald kicked it off with that horse of a Mohawk he’s got on his head.  He inspired us all.  I’m not much of a Mohawk kind of guy, but I had to go along with it.

Hour: Any pregame superstitions?
JH:  I never change any clothing.  I have my mom tirelessly washing everything, right down to my sliding shorts.

Hour: What scares you?
JH:  Jack McFarland when he’s angry.

Hour: Did you ever think about playing football?
JH:  I have thought about it.  They have a great tradition and coach (Petroccio) is the greatest guy in the world.  I got to him and we talk about certain issues.  He always told me I could play for him, but I’ve always been a soccer player.

Hour: When was the last time you cried?
JH:  Just recently when I found out about the death of Preston Hirten.

Hour: If you could spend 24 hours in someone else’s shoes, who would it be?
JH:  Michael Jordan, since I grew up in Chicago.

Hour: What’s the 1 thing most people don’t know about you?
JH:  That in lived in Japan for 2 years.  I think that’s where I got really good at baseball.

Hour: If you could go back in time and witness any event in history, what would it be?
JH:  Julius Caesar being murdered.

Hour: What’s it like playing sweeper for Staples?
JH:  It’s a little daunting considering the historyand all the great defenders who have come through the program.  But with (goalie) Mike McCarthy behind me and with the rest of the defense supporting me, it makes it real easy.  I don’t always have to do too much because they always do their job.

Hour: What’s it like playing for head coach Dan Woog in soccer?
JH:  It’s great.  He really brings the program together and keeps the tradition alive.  He always puts us in a position to win by putting the best lineup on the field all the time.  He also respects his captains, and all the players.  He’ll get our input on big decisions and actually use it.  Most coaches wouldn’t do that.

Hour: What’s more gratifying, stealing a base or saving a goal?
JH:  I’d have to say keeping the ball out of the net, since I’m in a soccer frame of mind.  In the spring, I might change my mind.

Jack Hennessy is explosive — on the soccer field, track or baseball diamond.