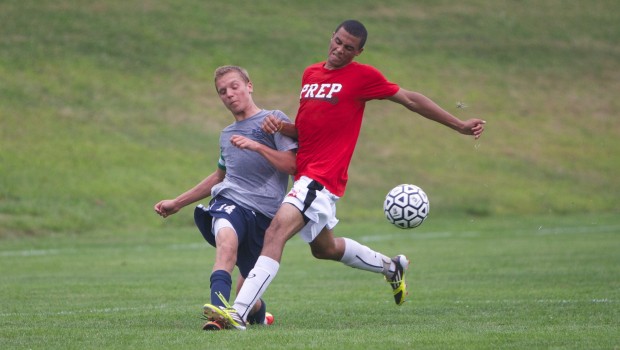 For the 2nd year in a row, Staples faced Fairfield Prep in a pre-season scrimmage.

Last year the Jesuits edged the Wreckers 1-0 — and went on to the state finals, losing a close contest to Norwalk.

This year’s match was the 1st for both sides. It started evenly, with good chances at both ends. At the 10-minute mark, however, Staples began to take control. Junior defender Gabe Pensak started a bang-bang play. His squad’s 1st legit shot — by sophomore Joe Pravder — was saved. But co-captain Jack Scott pounced on the rebound, and the Wreckers led 1-0.

The 3rd score was a beauty. Scott’s searing corner kick was power-headed in by defender George Kokallis.

The 2nd half saw sophomore Daniel Brill feed a ball over the top. Connor Weiler raced forward from midfield to slot it home.

The final minute saw goal #5, a fine solo effort from the left by Andreas Bru.

“This was a solid performance, against a strong, physical team,” said head coach Dan Woog. “We saw good things from a number of people. But after the game we talked about learning lessons from what we want to improve. At the end of the season, we’d like to look back on this as one of our poorest performances.”