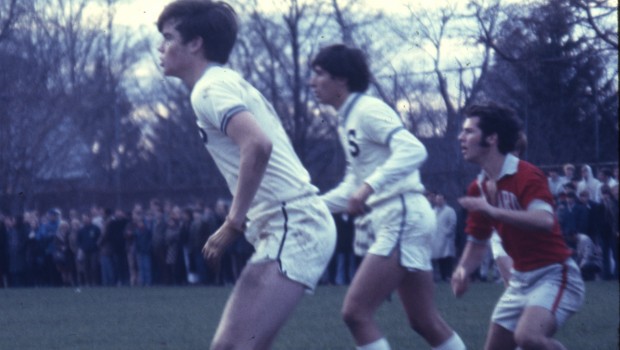 It was one of many ways the former Staples defender served his alma mater — and the program he captained in 1975. He has worked tirelessly behind the scenes for years.

Brickley never seeks accolades. But last weekend — at the “Meet the Huskies” event — he was in the spotlight. UConn head coach Ray Reid surprised Brickley with the “Bobby Rhine Leadership Award.” He is only the 2nd winner, following legendary Husky coach Joe Morrone. The award is named for the UConn All-American and Dallas FC player who died 2 years ago of a heart attack, at 35 years old.

Brickley — whose connection to  Staples soccer is as ongoing and passionate as his devotion to UConn — spoke from the heart about what the Husky program has meant to him. He noted with pride that his son Robert — a former Connecticut High School Player of the Year at Wethersfield High School — also captained the UConn squad.

Congratulations, Neil — and thank you for your long service to both Staples and UConn soccer. Before he starred at the University of Connecticut, Neil Brickley was a key defender on Staples’ 1970 team. He’s shown above (left) with Steve Levin, in the state championship match against Conard-West Hartford at Wesleyan University.