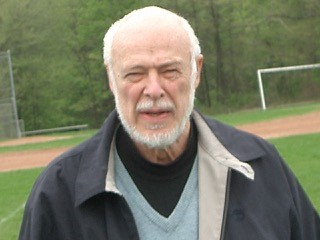 Howard Dickstein — one of Staples soccer’s most ardent fans — died in 2017.

In 2020, his memory lives on. It will be especially honored on Monday. Howard’s sons Peter ’73 and Steve ’75 — who went on to storied careers (and captaincies) at the University of Pennsylvania and Brown University, respectively — are sponsoring the livestream of the Wreckers’ home match against Ridgefield, in his name. Kickoff is 4 p.m. EDT; click here to watch.

The Hill was Howard’s home for many years. Long after his sons graduated, he rooted for the team. He also covered Staples soccer for the Minuteman newspaper.

An honors graduate of New York’s DeWitt Clinton High School (at age 16), he supported himself through NYU’s journalism school by working at an ad agency, and as a stringer for the Herald Tribune.

After serving in the Navy during World War II, he completed his NYU degree on the GI Bill. Howard spent most of his career in advertising, eventually running his own agency.

Howard’s passions ranged far and wide. During the civil rights era he helped bring speakers to Westport. He promoted dialogue between Westport and Bridgeport, and designed pamphlets for fair housing. He was president of the Southern Connecticut Ethical Society, a volunteer in the Norwalk Hospital emergency room, a meal server at the Senior Center, and a longtime Littlel League umpire.

Through it all, he had time for Staples soccer. In the early 2000s, when an early design for a new Staples High School placed it on Loeffler Field, he argued vociferously against it. The school was eventually built on the site of the old one.

Mike Carey ’01 will be a guest announcer for Monday’s livestream. He starred at Union College, and is now a producer with NBC Sports. He worked with Kyle Martino ’99 on Premier League broadcasts, and now handled NFL games.

Mike’s 2000 team won the FCIAC championship. They finished 19-1-1. Their only loss came in the state semifinals. Ranked #3 in the nation, they fell 2-1 to Fairfield High in a monsoon.

Carey will provide color commentary on the call with WWPT-FM sportscasters Jake Gersh and Max Dorsey.