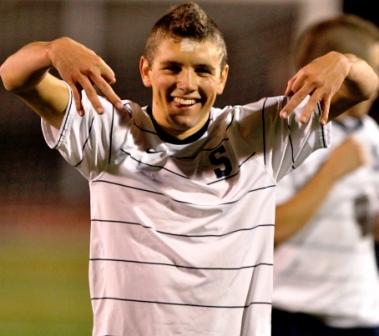 Mikey Scott added 1 more honor to the FCIAC soccer championship, ski team captaincy and All-State baseball selection he amassed this year.  The University of Michigan-bound senior was named Male Athlete of the Year by Inklings, the Staples newspaper.

Ryder Chasin’s Inklings story begins with Scott’s entry into the FCIAC soccer semifinal match, after 2 weeks on the bench with 35 stitches in his head.  Scott entered the scoreless game 5 minutes before halftime.  His throw-in — with 30 seconds to go on the clock — was headed home by Frankie Bergonzi.  The goal sparked the Wreckers to victory.

Winning the FCIAC crown this year — Scott’s 3rd in a row — “leaves a fantastic lasting impression of my soccer career at Staples.  I’m just thankful to be a part of the Staples soccer dynasty,” he told Chasin.

Staples head coach Dan Woog called Scott “a great young man.  More than just about anyone, Mikey was about to maximize his strengths and negate his weaknesses.  In the process — thanks to his always-positive personality — he brought everyone together.”

Scott thanked all his coached — including freshman and JV — along with his teammates — for his superb 4 years at Staples.  “I couldn’t be happier with the group of friends I made through sports,” he said.  “I plan to keep those bonds forever.”

2 Responses to Mikey Scott Named Inklings’ Athlete Of The Year