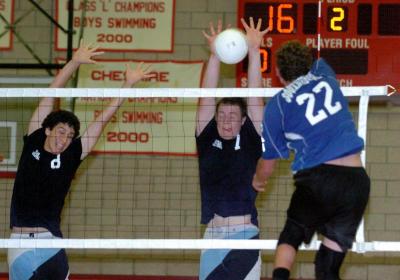 It was the Westporters’ 3rd straight title match against Southington.  The win gives the blue-and-whites 8 Connecticut crowns in 9 years, and marks their 80th consecutive win without a loss.

With the 2nd game tied 19-19, Fitzgerald stuffed Southington’s spike attempt.  “The momentum from that block carried over to the next 2 games,” the Stamford Advocate reported.

Congratulations to the still-reigning state champs, and coach Bruce Betts, for that remarkable achievement.  We’ll be watching next year for a 5-peat.  Fitzgerald will be back, hoping to be joined by current junior varsity players (and soccer athletes) Jonah Aelyon, Steven Denowitz, AJ Green, Max Hoberman and Jake McCambley.