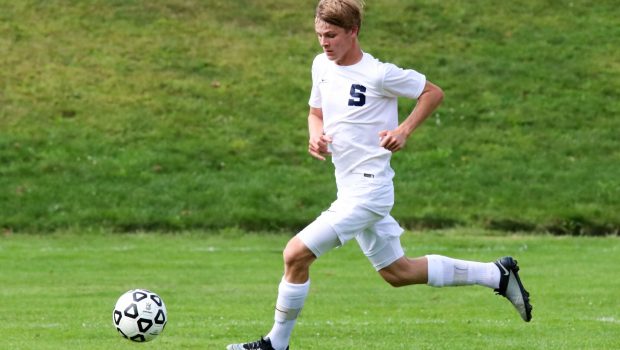 Three days after an epic 3-3 draw at Fairfield Warde, the Wreckers’ mission was clear:

Build on the well-played, hard-pressing 2nd half. Avoid the abysmal, chaotic 1st.

Staples treated a large Saturday crowd at sunny Loeffler Field to a strong start. Pushing forward, they put the Warriors under an early gun.

The Wreckers also stretched wide. The right side saw much of the early play, with outside back Nick Ambrose and midfielder Will Birch combining to send Sam Liles into the corner.

That paid dividends just 5 minutes in. Birch overlapped toward Jinny Parker Field, then laced a ball into the box. Anton Mahr never hesitated. His side volley was one of the nicest goals Staples has produced in quite a while.

Birch followed with another excellent run and cross. Then, in the 8th minute, he fired himself. The keeper bobbled the hard shot. Mahr — who has made a name this year with his alert follow-ups — was right there to bang it home.

Mahr and Timmy Liles took the lead in switching balls into corners. They teamed well with central midfielders Matt Engler and Patricio Perez Elorza, who laid off with deft confidence.

Staples made it 3-0 less than 2 minutes before halftime. Timmy Liles’ cross was toe-poked goalward by Azam Plummer. The keeper saved it off the post, but Steven Frost finished with power — and with his lesser-used right foot.

Remembering that Warde surrendered a seemingly solid 3-goal lead 3 days earlier, the Wreckers did not let up. Just 57 seconds elapsed before Ambrose fed Birch. He turned the corner, then slotted a pass into the box. Sam Liles converted easily, for a now-insurmountable 4-0 lead.

Coming 3 days after the Warde battle, this was an important win for Staples. Now they prepare for a tougher test — Trumbull — Tuesday night, away. FINAL SCORE: Staples 4, Wilton 0. SEASON RECORD: 2-0-2.

The reserves jumped out to a 5-0 halftime lead at Loeffler Field against Wilton. Nick DiMasi assisted Mauricio Inglada’s early strike; Lefty Penderakis powered through for the 2nd goal; then Jake D’Amico scored twice — the 2nd on a long looping shot off an Emerson Anvari feed — sandwiched around Andrew Marshall’s goal. Rob Diorio, Andris Perri and Benny Feuer tallied in the 2nd half, for an 8-0 final…. Will Birch works the right side against Wilton. (Photo/Alan Frost) The Wreckers cool down after Wilton. (Photo/Alan Frost)