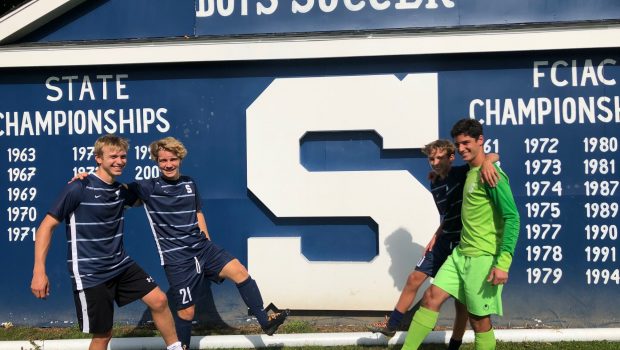 Trinity Catholic is the smallest school in the FCIAC. The Crusaders are a Class “S” (smallest enrollment division); the other 15 members are all either “LL” (extra large, like Staples) or “L” (large). It’s not easy.

In today’s home opener at Loeffler Field, Patricio Perez Elorza put the hosts on the board with an 11th minute penalty kick. The senior added his second tally 5 minutes later, tipping in a fine feed from Sam Liles.

They tacked on 2 more in the 2nd half. Reese Watkins — called up from the reserves, along with Will Adams and Thomas Corridon — finished Djuve’s pass. Watkins then assisted on Siroka’s second goal.

Those three looked strong in their varsity debuts. So did Emerson Anvari, in his first varsity start.

Many Wreckers wore rainbow laces. They participated in United Soccer Coaches’ Play With Pride initiative, a national effort to show support for LGBT players and coaches. Reese Watkins had a goal and an assist against Trinity. (Photo/Christina Bassler)