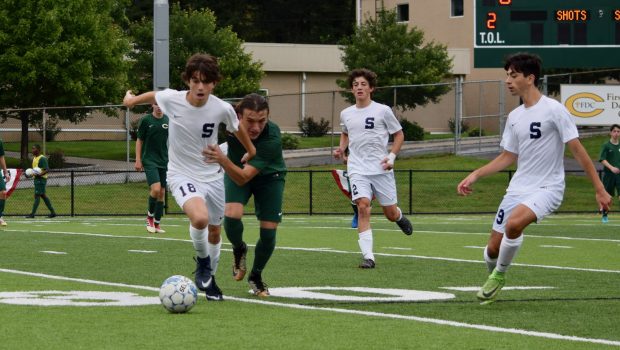 In years past, after rains like the past week, Trinity Catholic’s grass field would be a sloppy, almost unplayable quagmire.

But the Crusaders now play on beautiful turf. When the Staples soccer team made their 1st-ever visit to Giglio Field today, they were impressed.

Over the past few years, the hosts have also shown steady improvement on the pitch. They play solid team soccer, and are winning their share of matches.

The Wreckers’ first half lacked rhythm and passion. The sole highlight came less than 5 minutes after the opening whistle. Lefty Penderakis sent Sam Liles into the right corner. The junior delivered a clinical pass, which Patricio Perez Elorza finished with his head.

The second half offered a dramatic improvement. Staples knocked the ball around with precision. They found open men, stretched the field, and communicated well.

Just 5 minutes in, Vaughan Sealey played an excellent ball into the corner. Once again Liles crossed. This time Matthew Tanzer was at the end of the service — again with a header goal.

Seven minutes later, after nearly a dozen bang-bang chances in the packed goalmouth, the ball popped out to Pendarakis. He wasted no time burying it into the back of the net.

The blue-and-whites are in action next on Monday. Kickoff is 6 p.m., at Wilton’s Kristine Lilly Field. FINAL SCORE: Staples 4, Trinity Catholic 0. RECORD: 2-0-1. Surya Balaji moves up to midfield against Trinity, and played strongly. Gabe Baltierra is behind. (Photo/Armelle Daniels)