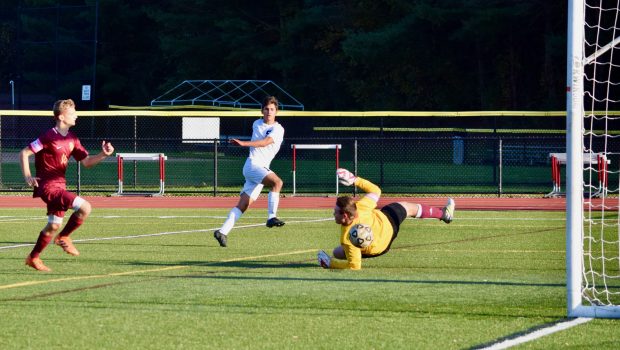 Most years, the FCIAC boys soccer playoff picture is unpredictable.

This fall, the race was the tightest in many years.

The good news: 3 of the 5 teams above the Wreckers — Fairfield Warde and Fairfield Ludlowe (both 10-4-2), plus Greenwich (9-3-4) had already completed their schedules. The Westporters were definitely in the hunt for a top 4 finish — and a home game when the 8-team FCIAC tournament begins Friday. It would be their first league tourney match at Loeffler Field since 2013.

But first, of course, the Wreckers had to win.

On paper the Cadets did not look like much. After beating Westhill 3-2, they’d lost 8 straight.

But it was their Senior Day. And this is the FCIAC. Anything can happen.

In the first 7 minutes, something did.

St. Joseph’s Sawyer Meehan ripped a 30-yarder, off a long throw-in. It was the first goal Staples surrendered in 4 games — a span of 307 minutes. Just like that, the Wreckers were down.

They had not been playing particularly well. The goal jolted them, and slowly they began regaining control.

In the 18th minute Lefty Penderakis rifled a shot. The keeper gave a rebound — and Nick DiMasi was there, for a textbook, straight-out-of-training follow-up goal.

Fifteen minutes later, a Staples corner kick worked its way to DiMasi. Again he fired — and again he found the net. It was a goal just like the strong striker scored last week at Ludlowe: a rocket into the back of the net.

Brendan Lynch almost made it 3-1, right before halftime.

After intermission, the blue-and-whites amped up their game. Mauricio Inglada and Wilson Daniels had several good chances.

The 3rd goal came, though, off a great through ball from Sam Liles. Austin Sholes finished, the same way he scored in his 2 previous games: outrunning the defense, then calmly slotting home low.

Sholes netted his 2nd goal of the day 10 minutes from time. His 40-yard free kick went through the keeper’s hands.

So the game — and the regular season — ended well for Staples. They’d achieved one of their pre-season goals — home matches in the FCIAC and state tournaments. Now all they could do was wait for results of other games today, to find out who they’d face.

QUICK KICKS: The freshmen fell 3-1 to Greenwich, their first loss of the season. Jackson Hochhauser hit a rope in the first 12 minutes. Reese Watkins and Sam Vannart played very well for the frosh. Nick DiMasi calmly finishes his first goal. He added a second later in the first half. (Photo/Armelle Daniels)