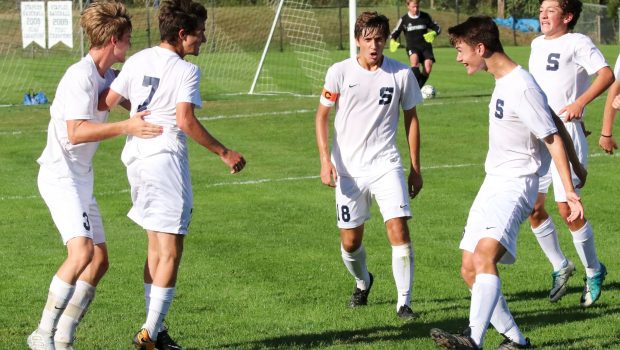 The temperature soared into the 90s this week, breaking records throughout Connecticut.

The action on Loeffler Field was even hotter.

On Monday, Staples shut out always-tough Greenwich — the coaches’ pre-season pick for #1 in the FCIAC — in a gritty 1-0 game.

Today, Norwalk came to town. The Bears were 5-0-1. Their only blemish came 2 days ago. Central — the same team that whipped the Wreckers 3-0 last Saturday — scored in the final 7 minutes at Norwalk, to earn a 1-1 draw.

The Westporters and their next door neighbors have had some epic battles over the years. This was hyped as another one.

It lived up to the billing.

Staples applied early pressure. As they pressed, the Bears retreated.

But they got a shot, just 4 minutes in. Keeper Ry Cohen outletted to Anton Mahr. He flicked on to Timmy Liles. The midfielder never hesitated, launching a long looper past the keeper.

The large crowd on The Hill loved it. Liles’ goal earned praise from one particularly knowledgeable fan: Kyle Martino ’99, former MLS Rookie of the Year, 8-time US men’s national team player, and now a noted EPL analyst for NBC Sports.

Five minutes later Chris Martenson — the tough, steady center back — roared forward. He turned the corner, and fired a great cross. Will Birch headed down, then fired — directly at the keeper.

Birch had another strong effort in the 21st minute. Five minutes later Cohen came out well, smothering Norwalk’s best shot of the half.

Sam Liles came off the bench, working the right side well; Azam Plummer did the same up front. They combined with Matt Engler, Vaughan Sealey and Patricio Perez Elorza to stymy the Bear backs.

Mahr’s 34th-minute drive into the box nearly hit paydirt too.

In the back, Staples’ defense of Martenson, Ryan Fincher, Nick Ambrose and Callum Wisher stood tall. They did it literally — with Martenson and Fincher winning the air wars, and all 4 stepping up, supporting and communicating when needed.

The Bears were not unbeaten by accident. They came out strong in the 2nd half, and for the 1st 20 minutes dictated the pace and play.

The Wreckers had their moments too — particularly when Steven Frost stole the ball up top, then fired just high.

Another good chance came in the 59th minute, when Wisher and Gabe Baltierra fed Sealey.

In the 66th minute Plummer slotted a ball across the middle. If a Staples player was there, it would have been a picture play.

Norwalk kept coming. In the 68th minute Birch stuck a ground-shaking tackle. But the Bears got the ball back, forcing Cohen into another nail-biting save.

Again, the Bears fought back. The kept coming right to the end, earning a free kick in the final half minute, and a corner kick in the last 10 seconds. Both times, Staples was organized, poised — and successful.

It was an excited, satisfied — and extremely hot and sweaty Staples squad that celebrated with their fans when the whistle blew.

Four days earlier — after Central — they wondered if their season was over.

The reserves drew with Norwalk 1-1. Colin Corneck rebounded in Benny Feuer’s shot; it began with a Nick Hein cross. The Wreckers looked strong and applied pressure for much of the match….

The freshmen fell 3-0 to Norwalk. Jack Douglas had a strong game for Staples. It was so hot, even the ballboys needed a break. (Photo/Alan Frost) Anton Mahr hugs Vaughan Sealey (#9), and the rest of the Wreckers celebrate their 1-0 win over Norwalk. (Photo/Alan Frost)