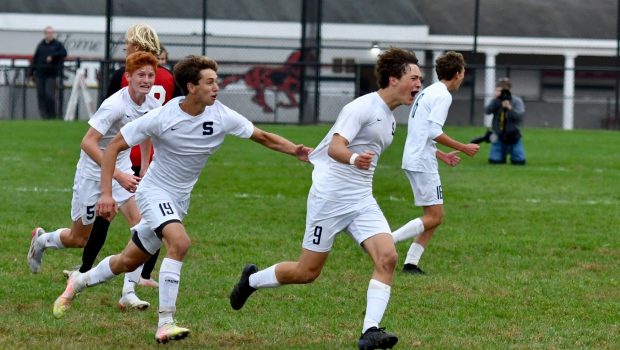 Last Friday, Staples traveled to Darien to face the undefeated Blue Wave. The Wreckers fell 2-1. They were not pleased, with either their performance or the result.

Today, they were on the road again. Again, they battled an undefeated team. The Fairfield Warde Eagles were 5-0-2; their record was marred only by ties with Ridgefield and Greenwich.

This was only the 2nd time the Mustangs played on their grass field this year. Staples plays on grass too. But this was higher and clumpier than Loeffler Field.

It was also wider — and Loeffler is plenty wide. Staples’ game plan was to play wide, drawing the strong Warde defense out of the middle.

As happened often this year, the blue-and-whites started slowly. Just 14 minutes in, captain Eric Jara split the Wrecker backs and finished. For the 2nd match in a row, the Westporters were behind.

Not until the final 10 minutes did the guests show sparks of creativity. Halftime was familiar: talk of urgency, of getting more numbers in the box, of playing “Staples soccer.”

And as happened often this year, the 2nd half bore little resemblance to the first. In a familiar fashion, Staples defended with purpose, and attacked with passion. Jackson Hochhauser, Bruno Guiduli, Ben Douglas, Matthew Genser and Hunter Smith won balls, cleared out of danger, and trapped the Mustangs offside often.

Midfield settled down too, with Tim Liakh, Dylan Hoke, Caleb Tobias, Marius Ekeberg and Jack Foster linking well and keeping the ball in the Warde end. Up top, Murilo Moreno, Jaden Mueller, Ryan Thomas, Will Adams  and Reese Watkins pressuring the ball. The tide shifted; now the Mustangs were under the gun.

Tobias and Genser sent Watkins in. His shot flew high. But it was a harbinger of things to come.

Smith fed Tobias, who drove into the box and was fouled. Watkins buried the penalty kick. Twenty minutes remained.

Warde battled right back. Their unbeaten record — at home — was on the line. But the Wreckers stood firm, and tall. They managed the game to the end.

And they managed to win. It was the biggest of the year. It came at the halfway point of the regular season.

Will it propel the Wreckers forward? Will it give them confidence, knowing they can score — and come from behind?

QUICK KICKS: Staples principal Stafford Thomas was at Warde. He personally congratulated each player after the win …

The day began with 3 undefeated teams in the FCIAC. Darien also lost, 3-1 to Greenwich today. Norwalk is the only unbeaten squad left ….

Hall-West Hartford is one of the top teams in the state. They’re led by Lucas Almeida. His father, Miguel Almeida, starred for Staples in 1983….

The freshmen edged Stamford 1-0, in a great match. Emmet Nivaud headed in a cross from Zach Gorin. … and then the celebration begins. (Photo/Mark Sikorski) The only thing Jacob Greenberger lost against Fairfield Warde was the bottom of his shoe. (Photo/Mark Sikorski)