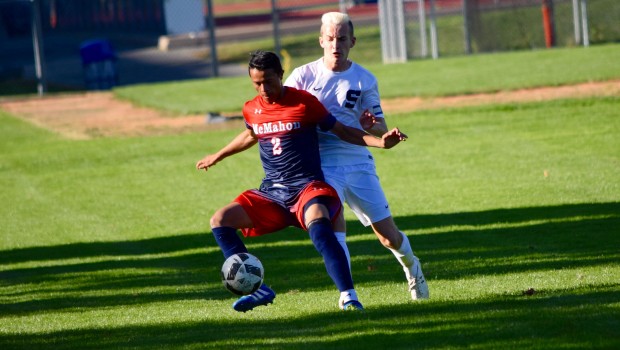 Brien McMahon’s new coach — Rodrigo Guzman — is a proud graduate of the school. He played for the legendary Ralph King, and his goal is to bring a winning mentality to the storied program.

The Senators — coming off an 11-1 win over Trinity Catholic — have played good teams well. The 2-5-1 record they brought to Loeffler Field, on today’s perfect fall afternoon, is deceiving.

Daniel Reid worked the right flank well. On the other side, Sam Kantor raced forward and served a dangerous ball that led to a corner kick. Fellow defender Teddy Lawrence headed just wide.

But his next header was strong and true. It came in the 22nd minute, off a Broccolo corner.

Ten minutes later, keeper Ziggy Hallgarten punched out a McMahon corner, then followed with another superb save. Nealon raced through up top, and was stopped only by an equally nice Jake Berkowitz stop.

But three minutes after that, Hallgarten again fed Nealon. This time he made an even longer coast-to-coast run, finishing smartly for a 2-0 lead.

The 2nd half featured more goals, and better Staples play. Spurred on by the take-no-prisoners defense of Kantor, Lawrence, Chris Martenson and Josh Berman, the blue-and-whites possessed well. In the 60th minute Kantor’s through ball put Daniels forward. The quad-captain calmly slotted his shot home.

A few minutes after Mahr ripped a shot off the post, Daniels scored again. He was again in front, this time assisted by Luca Cocito.

Thomas Heisler preserved the shutout with a late save.

The 3 points were important for Staples. Three more are on the line Friday. The Wreckers travel to Fairfield Ludlowe, for a 5 p.m. kickoff in what has become a gritty, neighboring-town rivalry. FINAL SCORE: Staples 5, Brien McMahon 0. SEASON RECORD: 5-2-3. Jared Wainshal scored for the reserves, in their 4-0 win over Brien McMahon. (Photo/Alan Frost)