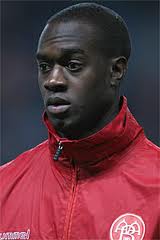 In 2004, Marcus Tracy’s 4 goals for Newtown High School single-handedly knocked Staples out of the state tournament, in the semifinal round.

Marcus — who played with several Wreckers at Beachside — went on to help lead Wake Forest University to a national championship, in 2007. The following year, he won the Hermann Trophy as the nation’s top player.

He played professionally in Denmark, and is  now with the MLS San Jose Earthquakes.

As yesterday’s Washington Post reports, Marcus was hit hard by last week’s Newtown murders. His mother taught at Sandy Hook Elementary School, where he himself had played youth soccer.

Marcus, his brother and friends — devastated, with the rest of the town — did their part to help. Marcus produces music as a  hobby, and put his talents together to produce a video tribute to his town: “We’ll Be Alright.”

It’s still hard to believe. It’s a very real reminder whenever I leave the house and see all of the media, police from out of town and out of state, the volume of traffic; it’s amazing, though, to see how the town has come together to uplift those most affected by the tragedy.

It hurts you as a resident of Newtown that something like this could happen, so just try and imagine how parents, brothers, sisters and spouses are feeling right now. You can’t; it’s impossible. After days of grieving and trying to comprehend what the hell happened, me and a few friends got together to think about what we could do to help uplift this town and its people. So I turned to one of the only things (besides soccer) that I know and love: music.

It was therapeutic for us, but also a means, we felt, to represent our town. Right now the whole world knows the town Newtown, CT for one reason only. But Newtown means something much more to each one of us.

This is the only way we knew how to speak back to the community and the world that, yes, we were hit hard and suffered great loss, but we will bounce back. And also our way of recognizing and lifting up the 26 people who needlessly lost their lives that day.

Click here, or below, to see Marcus Tracy’s tribute to Newtown.