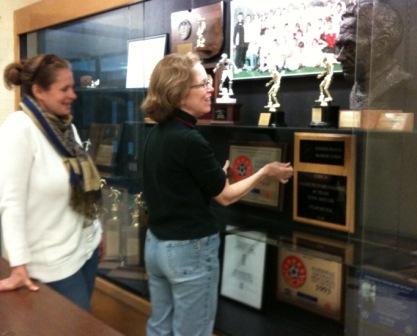 Pam Evans and Lisa Krosse working so hard, there's not even time to look at the camera.

As soon as they were done today, after several long hours of work, the glass case — which occupies prime territory just outside the gym — accomplished its purpose.  Dozens of students stopped to stare at the display, and talk about the many mementos inside.

What’s the same (but cleaned and looking spiffy)?

The trophy case is as handsome as ever — and still packed.

But here’s the Staples soccer promise to the 2010 team, and all others that follow: