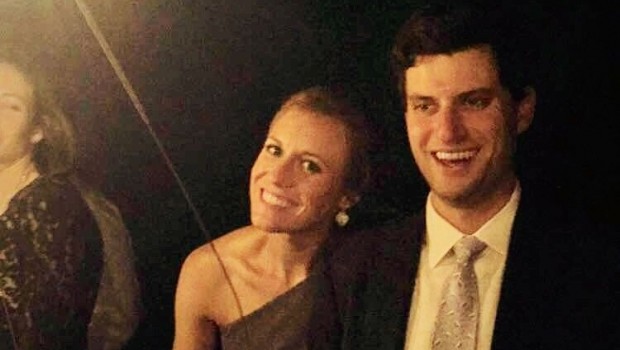 Liam Bohonnon — a key player on the 2007 team, and the longtime, much-loved adult-with-a-kid’s-heart on many summer trips — is getting married.

He and Kate Monari will tie the knot on Saturday, August 26 — the 3rd day of preseason tryouts — at St. Luke Church in Westport.

The couple met on the Villanova University tennis courts in the fall of 2008.

Liam — a former Staples tennis captain (and national paddleball champion) — was a freshman. Kate was a sophomore. They quickly became friends.

From tennis practices to tournaments, recruit weekends, parties, and frequent Blackberry messaging, Liam realized Kate was his perfect “match” — and not just in tennis terms. By the summer of 2010, they were officially dating.

After college they spent 3 years in New York City. They’re now in West Hartford, with their dog Nellie. Liam is finishing his 3rd year at the University of Connecticut School of Law. This summer, following the bar exam, he will be working at a Hartford law firm.

PS: How great a woman is Kate? She’s letting Liam go on this year’s summer trip to Vermont, just a couple of weeks before the wedding!