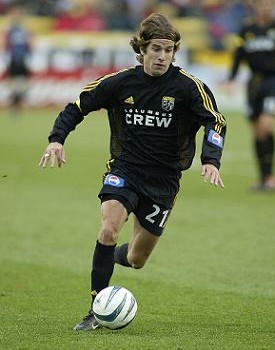 Kyle Martino ’99 Named To College Soccer ‘Team Of The Decade’

Kyle Martino — who starred at the University of Virginia in the early 2000s — has been named to College Soccer News’s “Team of the Decade.”  After college, the former Wrecker earned Rookie of the Year honors in Major League Soccer; teamed with David Beckham on the Los Angeles Galaxy, and had a stint with the national team.

He now works in finance with Lenox Advisors, is an ESPN soccer broadcaster, and helps with Staples soccer whenever he can.

The midfielder is 1 of 11 players on the 1st team — 4 of whom have Connecticut connections.  In addition to Kyle, the list includes Newtown High School’s Marcus Tracy — who starred at Wake Forest University, before playing professionally — and Chris Gbandi and O’Brian White of the University of Connecticut.

Congratulations, Kyle, on another well-deserved honor!