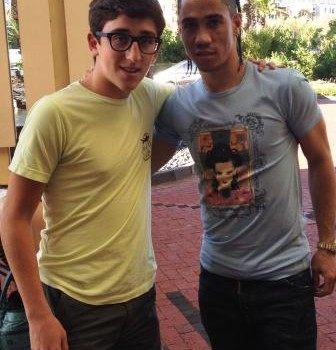 Late last month Jay Kaplan was walking through the foyer of the One & Only resort in Cape Town, in the senior varsity player’s  native South Africa.

Suddenly he spotted Steven Pienaar. The Everton attacker and South African national team member was leaving. Jay followed him out, and chatted him up.

Jay complimented Pienaar on his goal against Chelsea the weekend before. Pienaar asked if he played soccer. Jay told him about Staples — and his club team, coincidentally called Everton.

If the Premier League star wasn’t in a rush to leave, perhaps they could have knocked the ball around. And Jay could have told him more about the magic of Staples soccer.

One Response to Jay Kaplan Hangs With Steven Pienaar