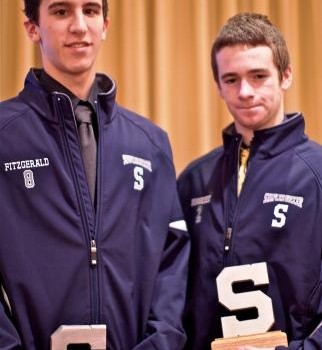 The Norwalk Inn was jammed, as parents, siblings, alumni and friends honored the 2009 varsity, JV and freshman teams this afternoon.

Jack Hennessy’s teammates voted him Most Valuable Player — earning the quad-captain and hard-nosed sweeper a Block “S,” the most prestigious award in Staples athletics.

Mikey Fitzgerald, the central defender-turned-goal scorer, received the other Block “S,” as Most Improved Player.

Michael McCarthy earned the Alumni Award, given annually to the player who best epitomizes the values of Staples soccer.  After 9th grade, Michael made the difficult decision to become a goalkeeper, in hopes of helping his team as a senior.  The Alumni Award takes on special significance because his father, Stuart McCarthy, won a state championship in 1978 as a Wrecker.

Amy Lamb was honored with the Jeff Lea Award, presented to an adult for long and meritorious service to Staples soccer.  Amy has remained active in the program long after her 3 sons graduated.

The 2009 team voted Frankie Bergonzi, Sean Gallagher and Brendan Lesch as captains for next year’s squad.  “They are very worthy successors to generations of Staples captains,” said head coach Dan Woog.  “They have a big job ahead of them, but I am confident they — and the entire 2010 team — can rise to the challenge.”

Goalkeeper coach Tom Henske spoke eloquently to the state champions.  He told them they are special people — because they have unlocked the keys to success in life — but warned of the burdens that being on top can bring.

Sam Bender’s video was a highlight of the afternoon.  In 10 minutes the talented videographer captured nearly every goal, great pass, excellent defensive effort and save in all 24 matches.

The 2009 team — together one last time, at the annual banquet. (Photo by Carl McNair)