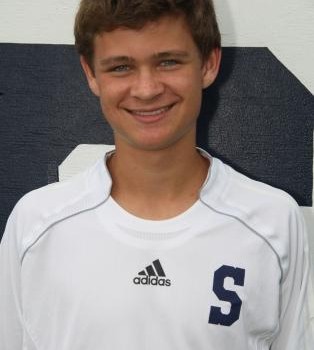 On Sunday night, senior Greg Gudis spoke at the Staple boys soccer banquet.  Here’s a portion of what he said:

It’s finally over.  My playing days at Staples are over.  I am not sure how to feel about the closure of my Staples career. While mine unfortunately ended a few games before everyone else’s, I’ve had a revelation in many ways about “closure.”

I attended Fairfield Country Day from 6th-8th grade, leaving many of my grade school friends behind.  Towards the end of 8th grade I faced a decision on where to attend high school.  I was leaning towards boarding school. But the deciding factor became Staples Soccer.

My earliest memories about Staples soccer date back to when I was about 14.  I witnessed Preston Hirten score the 2nd most beautiful goal ever, against a strong Greenwich opponent.  (The first — well, I’m partial to my goal against Glastonbury in the state semi finals.)  I remember thinking to myself, one day I would like that to be me. The roar of the crowd, the high fives from teammates, coming out on the winning end of a bitter rivalry — hand in hand with my best friends…that was a great picture.

My freshman year, Dan took a chance and took four freshman under his wing. Myself, Sean Gallagher, Brendan Lesch and Frankie Bergonzi were among only a select few in Staples history to make varsity as freshmen.  I trained hard; showed I belonged, and even scored a few goals.

My sophomore year was a completely different experience.  We picked up another 3 sophomores, so we were now 7; this would be significant over the next 3 years. Dan and Kurt placed a relatively young team on the field.  We won our first FCIAC title, and it was surreal.  Beating Greenwich after being down 1-0 was amazing.  I remember the roar of the crowd; the high-fives; the whiteout flooding the field, and for the first time, acceptance of the young 7 by even the doubters.

Winning FCIACS, the team was instant celebrities at school.  It was awesome. We felt on top of the world.

That year, while learning what it feels like to win, we also learned what it was like to lose. We lost to Glastonbury 2-1 in the state semifinals. There was not a person on the team who didn’t hang his head down and shed a tear.  I remember sitting in the middle of the field, feeling all alone, thinking that I just couldn’t get the job done.  That feeling stuck in our stomachs for an entire year. We were determined to come back and avenge our defeat.  We trained even harder.

Junior year could not have been better.  I learned what it was like to win in style, with guys I cared about who had my back.  The team cruised through the regular season and ventured into the post season. Back-to-back champions were born, but it wasn’t enough.

Despite hitting a speed bump and going into PKs against Newtown, we avenged Glastonbury in one of the most memorable games of our careers.  Then we captured a state championship.  I felt on top of the world.

Unbelievable.  Next year would be my senior year; I was a state champion, and we had made significant contributions to another 20 win season.   What could go wrong?

Let’s rewind to a year ago.  I am sitting in this same banquet celebrating a great season; the leading scorer, thinking I am about to be pronounced a captain.  That didn’t happen.  Adversity struck in a near perfect year— especially when I had done more than put a few in!  What was happening to the perfect ending?

Wonderful Mrs. Lamb was the first person who reached out to me and helped me see the bigger picture.  She knew much more about adversity than I.

My senior year; this year was different than I expected.  I was determined to come back better, faster and stronger.  I had some individual goals (like 50); 4 of us had already committed to DI colleges.   But we struggled in the early games.  Many on the outside, and maybe a few on the inside, thought something was broken; the 4 freshmen looked more like a feuding Dukes of Hazzard re-run.

I was playing for Staples, for legacy, and for pride.  It wasn’t about individual records; being a press tag-line, or being captain. It was about tradition and lifelong friendships with guys I stood shoulder by shoulder with since age 6.

November 11 — adversity struck again. A great goal in OT after a pretty mediocre game, I am taken down with 5 minutes to go.  A fractured tibia, and I am out for the season; my Staples playing days over.  My teammates and best friends would be forced to go it alone.  The seniors were banged up; duct taped together.  Lying in the ER and getting a note of encouragement from Dan, I had a revelation; maybe it was the pain killers?

I came to practice the next day, in a lot of pain and fighting serious emotions.  I looked at the faces of my teammates, especially the underclassmen.  They were down; almost like a ship adrift at sea.  I knew that if I couldn’t do it on the field, I had to do it on the sidelines.  I spoke to the team about Staples’ winning tradition; about overcoming adversity; about being more than 1 or 2 players, and how their time had come to step up and show everyone that they were the future and worthy of wearing the “S.”  It would be their team in a month.

They responded with back-to-back wins.  Everyone stepped up in an 8-2 smashing of Hall in the semis.  Unbelievable!  The guys whose backs I had all season — Lorenz, Smith, Hobie and Malowitz — responded with conviction…and of course James, who has been the most rock solid underclassman all season.

Does this have a happy ending?  Unfortunately the finals didn’t go our way.  We were a better team, but didn’t get it done and that sometimes happens — there just wasn’t enough left in the tank!

To next year’s team:  Use not finishing with a win as motivation to reach deep and continue a 53-year winning tradition; watch each other’s backs; and define your own legacy within the grander Staples Soccer legacy.

In closing:  So much of who we are in life is made up by family.  Staples Soccer is my family.  (You too, Mom and Dad!)  I believe that Family measures our stability; it defines our character; and it dictates our happiness and well-being.  Maybe it took an injury and being on the sidelines to figure this out.  Who knows?

I honestly would like to thank my teammates who had my back, and coaches over the last 4 years for allowing me to be a part of the Staples soccer family. To Dan, Tom and Kurt:  Thanks for guiding me through adversity; for believing in me, and for taking a chance in 2007 when 4 young freshman set out to be part of something special.

Perhaps it takes adversity to understand what success is all about.  In life you find out who your friends are when things don’t go well.  Records — 63-7-1; a three-peat of FCIAC titles; 2 state championship appearances and a state title are all great, and are this team’s legacy.

In 20 years we will look back and say damn we were good.