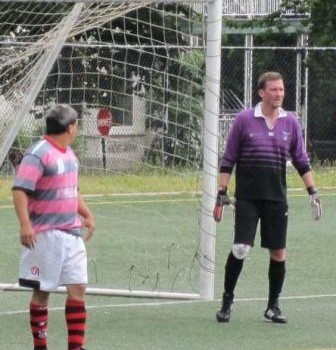 The former striker — a Duke and Northwestern University Kellogg School of Management grad, whose sister-in-law Barbara Robbins teaches English at Staples — has spent the last year in Montreal, as a plant manager for Electrolux.

Here’s his account of his spectacular return to the game:

My wife, baby daughter and I were walking past a soccer field in Parc Jeanne Mance last weekend.  We met a nice guy named Cesar, who said his team was playing next weekend and desperately needed a goalkeeper.  Long story short — yesterday I played goalie in my first soccer game in 10 years.

We won our first game of the season!  So despite my age, lack of athleticism and generally poor fitness level — yes, I was winded just playing goalie — I am now the starting netminder for the “Once Amigos” Peruvian futbol team (average height 5-1 … now 5-2 with me on the team).

The Robbinses move soon to Memphis.  In the meantime:  Go, Once Amigos!

George Robbins looks like he's played goal his entire life. He definitely has the wingspan.