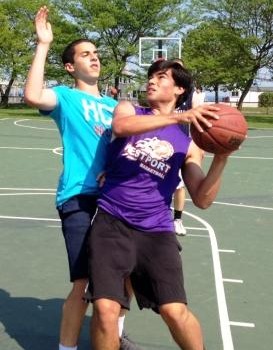 Despite 90-degree heat, and having only 2 players in a 3-v-3 basketball tournament, Foster Goldberg and Charlie Leonard were the big winners in today’s Octathlon of Champions event.

They won their final round-robin game at Compo Beach to advance into the finals, then captured the championship. That vaults Foster into the overall Octo lead, with 40 points. Trailing close behind are Daniel Boyce (38 points) and Jack Scott (35). Complete standings are below.

Next up: Jack Scott’s 5K, set for June 22 in Fairfield. It’s part of the Hole in the Wall Gang Camp fundraiser. There are plenty of opportunities to gain points, based on the amount of money raised.

Steve Sobel underneath the hoop, defended by Noah Schwaeber.