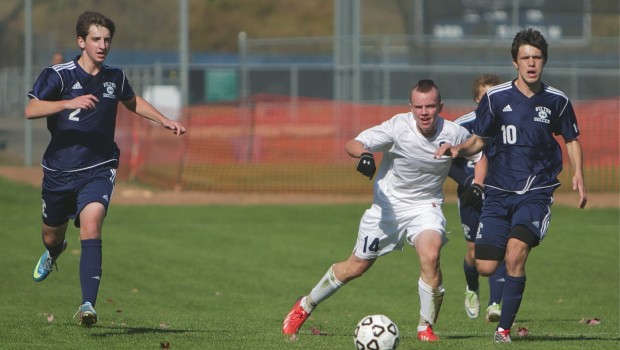 It was a scene that’s been repeated for 55 years: a beautiful fall Saturday. An enormous crowd packing The Hill. A big game — #4 Staples vs. #5 Wilton, in the FCIAC quarterfinals — with everything at stake.

In the 5th minute Pravder and Jack Scott earned a corner kick. The keeper bobbled the ball, but the rebound shot was saved.

The Wreckers had several free kicks and corner kicks. But the balls hung in the air, to be gathered by keeper Will DeSantis or easily cleared.

Jack Brandt struck in the 25th minute, on a counterattack against the run of play. Defensive over-commiting — and failing to slow the attack, to get numbers back — hurt the Wreckers. It was Wilton’s 1st shot of the game.

Staples came right back, though the Warriors got a shot of confidence from the goal.

Hard play on both sides intensified. With 3:18 to play, Alanis was fouled. A scuffle ensued. When the dust cleared, Alanis was shown a yellow, while there were 2 reds: one to Wilton’s Justin Shepard, the other to Wrecker defender Kokkalis.

With 9 field players each, the game opened up in the second half. Staples piled up corner kicks — 8 on the day, compared to the Warriors’ 2 — and Steven Sobel’s long throw was like a corner. The Wreckers had a number of agonizingly close chances, but for the 3rd match in a row it seemed a force field protected the opponents’ goal. With 12:42 to go — again, against the run of play — Brandt netted his 2nd goal. It came off a deflected clearance.

Staples fought like — well, warriors. But Wilton managed the clock well, and attacked hard and often enough to keep the Wreckers from going forward with even more men.

“”I feel very badly for our guys,” said head coach Dan Woog. “They’re playing well together, they never give up, but we haven’t gotten results.”

But, he added — harking back to all those big matches from Staples’ past — “there’s one more big ‘season’ coming up: the state tournament. We’ve got 10 days to catch our breath, work on the little things that add up to big ones, and get ready to make what could be a great run.” FINAL SCORE: Wilton 2, Staples 0. SEASON RECORD: 10-5-2.

Last night’s FCIAC quarterfinals saw #1 Greenwich concede the 1st goal to #8 Norwalk. But the Cardinals equalized 5 seconds before halftime, on a corner kick. They added 3 more in the 2nd half, for a 4-1 win. #2 Ridgefield edged #7 Fairfield Warde 2-1, while #3 Fairfield Ludlowe fell 1-0 to #6 Stamford on a goal with just 2:01 to play. Wilton requested a 1-day delay due to the funeral of a father of many players’ friends, which is why Staples played today. The Wreckers break out — and Wilton defends — as Diego Alanis drives in a free kick. (Photo/Susan Woog Wagner)