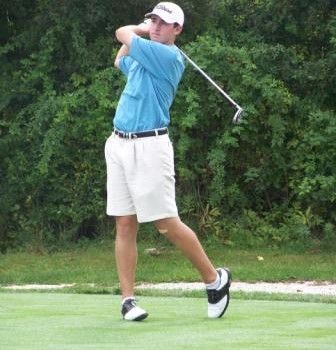 Dave Wilson ’75 made his mark on the soccer field, as a Staples and Dartmouth College captain.

His son Cameron is earning raves on the golf course.  Now he’s headed across country, to join the famed Stanford University golf team.

The 17-year-old Rowayton resident — a senior at St. Luke’s  School — signed a national letter of intent recently with the NCAA Division I power.  Dave, his mother, school officials, coaches, teammates and friends looked on.

Stanford has won 8 national championships — the most recent in 2007.  Its most famous golf alum is Tiger Woods.

Last year Cameron became the youngest winner in the 107-year history of the Met Amateur Championship.  He reached the round of 32 in the USGA Amateur Championship, and was a quarterfinalist at the USGA Junior Amateur.  He is ranked 7th nationally for junior golf in the Class of 2010, 13th overall nationally.