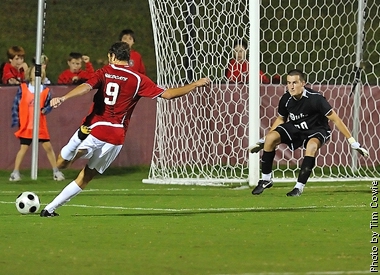 Charlie Reiter ’06’s hot foot continues.  The senior assisted on an early goal, then knocked in the 3rd as Davidson College beat a nationally ranked opponent for the 2nd time this year.

Davidson’s 4-1 home victory over #6 Duke was the Wildcats’ 7th straight victory.  Earlier, they downed #25 South Carolina by a similar 4-1 margin, also at home.

Reiter’s corner kick led to Davidson’s 1st goal, just 3 minutes in.  In the 57th minute he rebounded in a shot the Blue Devil keeper could not control.

The points were Reiter’s 7th goal and 7th assist of the season.  His 21 points give him the team lead.

The Wildcats’ next match is on the road:  this Saturday at Elon.

Charlie Reiter nails his 7th goal of the season