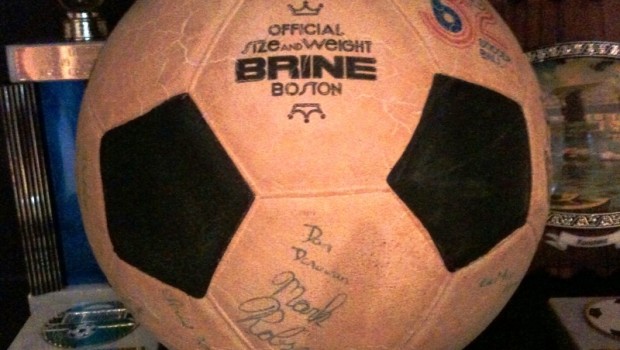 Staples coach Dan Woog had one — in his home trophy case.  He snapped a shot of the ball —

— and sent along this caption:

This was signed by members of the first Westport (CT) Soccer Association U-14 team, in 1975, which I coached.  Dan Donovan, whose name is visible, went on to become captain of the 1981 state champions at Staples High School, then captained Lehigh University.  He now coaches his own sons in the WSA.

Staples is still a high school power, and the WSA remains one of the strongest town clubs in the Northeast.

The photo did the trick.  Today the Staples boys soccer team received 10 championship Brine balls, plus a ball bag.

The Wreckers have not used Brine balls in years.  But in soccer — as in life — whatever goes around, comes around.

One Response to Brine Ball Earns A Prize