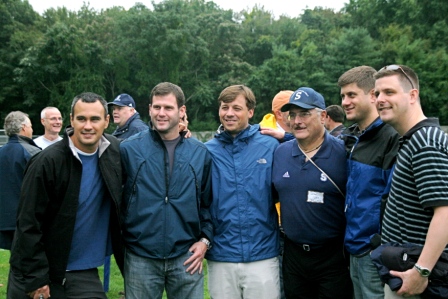 In 1992, Davidson College made an improbable — and inspiring — run to the NCAA Division I semifinals.

As a senior, he co-captained Staples to a 16-2-1 mark. However, most college coaches thought he was too small.

Two years later, Deegan led a stellar defense. On the other end of the field, Rob Ukrop scored 31 goals — bringing his college career total to an astonishing 76.

With fewer than 2,000 students, Davidson is a tiny D-I school. But — like Deegan — they played big.

In September the Wildcats beat the University of North Carolina, ranked #10 in the country, 4-3. The next month — in Los Angeles — they beat UCLA. Bruin keeper Brad Friedel had started that summer for the US Olympic team, in Barcelona. He’d let up only 2 goals for UCLA all year — but Davidson won 3-1.

Their regular season record of 16-4-3 earned them their 1st-ever bid to the then-28-team NCAA soccer tournament. Slagle assured them they could win it all. They agreed.

The best was yet to come. Deegan saved 2 penalty kicks after a 2-2- tie with the University of North Carolina-Charlotte. Then came another draw against Coastal Carolina. Davidson again went to penalty kicks. After 5 — still tied — they went to sudden death. Deegan made 5 – five!  — saves in that PK game. Three were on shots that would have ended their season. The last one he tipped up, onto the top of the crossbar, then over. The match was played at Davidson; pandemonium reigned.

The quarterfinals, at North Carolina State, went to triple overtime. At last, there were no PKs — just a Ukrop sudden-death goal in a mad scrum in front of the net.

Amazingly, the host for the NCAA D-I semifinals and final that year was — Davidson. The campus went crazy. With the field in the middle of campus — right next to dorms — the atmosphere was electric.

A crowd of 8,000 saw the home team score just 8 minutes into the semis, against the University of San Diego.

But it had been an amazing ride. The team accomplished something phenomenal — for themselves, their coaches, their school and the small college town.

25 years later, they still feel bonded together. “It rooted in me the belief that if you set goals, and you put your head down…” Deegan says.

He went on to play professionally, with the Richmond Kickers and MSL’s DC United. He’s now married, with 3 kids, and is a principal at Juggernaut Capital Partners, an investment firm managing more than $700 million in assets.

And — despite all that he’s done — he’s still a Staples soccer fan.

(Click here to read a long story about the 1992 team in the Davidson Journal.)