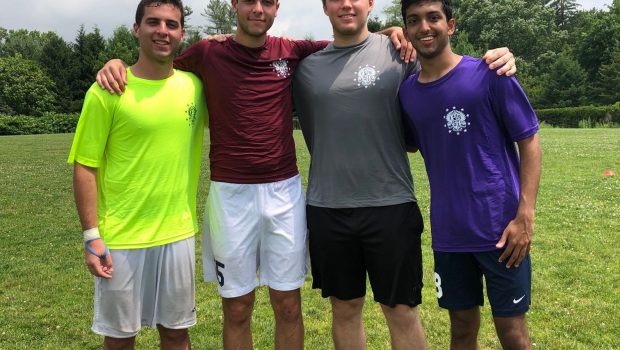 From up and down the East Coast — and from rising freshmen to married-with-children — nearly 100 current and former soccer players gathered for today’s 10th annual Preston Hirten 7-v-7 soccer tournament.

The event celebrates the memory of Preston Hirten ’07. The All-State Staples High School player died during pre-season of his junior year at the University of Mary Washington. Every year since, UMW players and grads join Preston’s Staples and Beachside teammates, along with current Wreckers and alums.

In a rare event, 2 teams of current Staples players emerged from the 9-team round-robin, and reached the semifinal.

Both fell just short of the final. Second-seeded Goon Squad — primarily returning varsity players — lost 4-1 to #3 Karl 7-Eleven, a squad of talented Mary Washington grads. Many still play; 2 are college coaches. It was revenge for the older side, as Goon Squad edged them 1-0 in the preliminaries.

Karl 7-Eleven (named for a beloved store clerk in Virginia) topped Rownaldo (named for player Steven Rowland) in the final. The UMW side is a former champion, but lost in the finals last year, and fell on penalty kicks the year before.

The very successful day was organized by Matt Lamb, with help from Stuart McCarthy, Marc and Lisa Hirten, and Dave and Laurie Gendell.