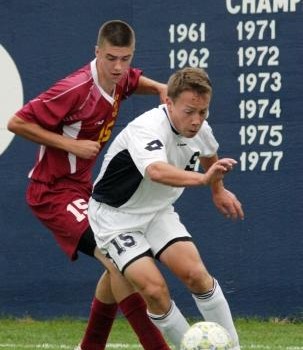 #15 Passed Down To James Hickok

One of the highlights of last night’s Staples soccer banquet was the start of a new tradition:  passing along Preston Hirten’s #15 to a younger player.

Before the announcement, Preston’s mother Lisa described in loving detail how important it had been for the Hirten family to watch Frankie carry on Preston’s tradition of tough, passionate and prideful play.  She thanked him for helping maintain Preston’s memory in so many ways.

Frankie Bergonzi — who wore #15 for the past 3 years — then spoke eloquently of what the number meant to him.  He called it “the greatest honor of all,” and quoted the Hirtens’ note to him 5 days after Preston’s death:

Frankie…we will be watching you.  You are the perfect person to wear Preston’s number.  Good luck this year.  Go for it the way Preston would.  Love you guys.  Marc and Lisa Hirten.

“To this day,” Frankie said, “the biggest compliment I have ever received was that in the eyes of his own father, I was worthy of wearing Preston’s number.”

Though Frankie had always thought of #15 as his own number — both he and his father were born on the 15th — he spent the last 2 years thinking of it as Preston’s number.  “I was just given the privilege of borrowing it for a few years,” he said.

Frankie recalled being in 8th grade, and watching Preston:

He had speed.  He had skill.  He had composure.  But what I admired most was his heart and determination.  This kid simply never quit.  He was relentless.

Preston’s incredible work rate game after game influenced me to become a harder worker.  I wanted people to say the same things about me when they evaluated me as a soccer player, and more importantly as a person.  I wanted to be known as the hardest worker, and the kid with the most  heart….

I knew there would be times when I wouldn’t be the strongest kid on the field, or the fastest.  But I also knew that outworking my opponent was always within my control.  I learned from Preston that you can’t always control what’s going to happen on the soccer field, but you always have control over your work ethic and that nothing should prevent you from working hard.

After describing Preston’s kindness to him as a young Watermelon Cup player, Frankie said:

My most heartfelt memory of last year’s state championship was not winning the game.  It really wasn’t.  It was going up to the stands after all the celebration, and seeing Preston’s mom.  I went up to her, and she thanked me for wearing Preston’s number so proudly.  That moment will stay with me forever.

And then — citing his charge to “give the number to a player who played the game most like Preston, with unparalleled determination and passion” — Frankie concluded:

It is my responsibility to hereby pass on #15 to James Hickok.

4 Responses to #15 Passed Down To James Hickok